A Lyric Hammersmith, Munich Kammerspiele and TEATER NO99 production 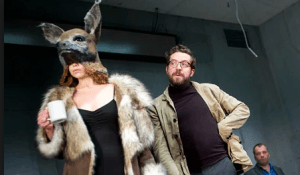 ‘It’s not going to get dark tonight.’

The London premiere of a dark new thriller by Simon Stephens, set across three countries exploring human trafficking and the vice trade.

A woman’s severed head is washed up on the banks of the Thames in Hammersmith. Two British detectives set off on the trail of her murderers. While crossing borders and language barriers they enter a nightmarish world that will change one of them forever.

Simon Stephens was last at the Lyric with the award-winning Punk Rock and A Thousand Stars Explode in the Sky.

A Lyric Hammersmith, Munich Kammerspiele and TEATER NO99 production