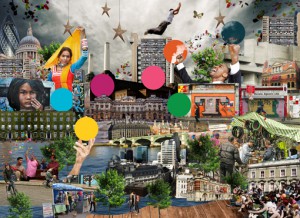 World Stages London is a once-in-a-lifetime celebration through theatre of the exhilarating diversity of London’s people and culture.

A series of exceptional shows, created by leading UK and international artists, will each draw on the particular experience of one of London’s cross-cutting cultural communities. The shows will be seen by hundreds of thousands across London as well as abroad. World Stages London brings together leading London theatres to collaborate in a way never seen before. The partners are: Battersea Arts Centre, Bush Theatre, Lyric Hammersmith, Royal Court Theatre, Sadler’s Wells, Somerset House, Theatre Royal Stratford East and Young Vic, in association with the National Theatre Studio.

They will be joined by Actors Touring Company, Hall for Cornwall, King’s College London , Kneehigh, The Opera Group and WildWorks from the UK as well as No99 Theatre of Estonia, KVS – Koninklijke Vlaamse Schouwburg of Belgium, the Munich Kammerspiele of Germany, ShiberHur of Palestine, Théâtre des Bouffes du Nord of France and the American Repertory Theater of Boston, US.

The shows draw inspiration from the UK, India, China, France, South Africa, Germany, Estonia, Brazil, Cuba, Nigeria, the Middle East and the US, with a wide appeal to anyone who loves theatre as well as to those engaged with the global inter-connectedness of modern life.